Fly Away With Me: The National Gem Collection’s Most Spectacular Piece…According to Me

For the jewelry lover, there exists a place so wondrous that it is truly a dream come true. A carefully catalogued and curated collection of the most incredible jewelry and gem specimens from around this beautiful planet resides inside the Smithsonian Institute’s National Museum of Natural History in Washington, D.C. On the top floor (so it is closer to heaven, I suppose), the Janet Annenberg Hooker Hall of Geology, Gems, and Minerals beckons all who come near to feast their eyes upon the glory of the earth. It is truly mindboggling to gaze upon the riches of the elements, rocks, and minerals that make up our Earth’s crust.

Being a rabid fan of jewelry and all things beautiful, I set out to pay my respects to this magnificent place. In late July 2017, I took to the air and went on a special journey. Funny story, and cautionary tale to all jewelry lovers: In an effort to not set off the metal detectors in airport security with the amount of jewelry I usually wear, I packed all the jewelry I was taking with me into a quart-size zipper baggie (this is how jewelry lovers pack for a weekend: jam-packed quart-size bags). My genius plan only got me so far…my travel-size bag of jewelry was a giant blob of metal on the luggage metal detectors, necessitating a bag check with security. What are you going to do? Win some, lose some. 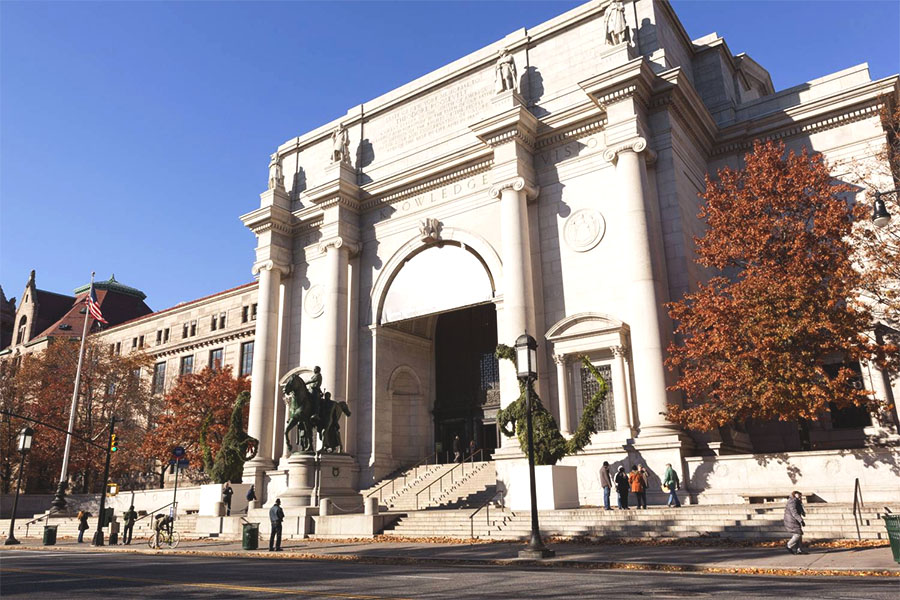 After arriving in our nation’s capital, I anxiously awaited entrance to my happy place. Once inside, I grew increasingly excited. Everywhere you turn, there is another display, another case, another realization of how spectacular the natural world can be. We started with one of the most recognizable diamonds in the known world: the Hope Diamond. Along with the Hope Diamond, all the other major players are there: Empress Marie-Louise’s diamond necklace, Marjorie Merriweather Post’s diamond and turquoise diadem (which was previously owned by Empress Marie-Louise, in fact, and originally featured emeralds instead of turquoise), the diamond and emerald Spanish Inquisition necklace…I could go on and on. In fact, I will go on in another blog. Today is just the first installment of a National Gem Collection series.

Beyond all that, there are literally thousands of the most impressive specimens of rough and faceted gems. It is easy to make the mistake of thinking that the only gems that exist are the ones commonly thought of in relation to jewelry. But in fact, there are dozens of gems that are breathtaking in their beauty, but are tragically too fragile for use in jewelry. Still deserving to be celebrated, they are proudly exhibited by the National Gem Collection. Again, another blog for another day.

Today, I am dedicating the remainder of our time together to a lesser-known (although I cannot fathom why) piece in the National Gem Collection. This piece, the stunning Cindy Chao Black Label Masterpiece Royal Butterfly Brooch is significant for several reasons. First, the artist, Cindy Chao, is the first Tiawanese jewelry artist to have a piece of her work displayed at the Smithsonian. Chao donated the piece, which represents her personal metamorphosis from jewelry maker to jewelry artist (although I would humbly submit that skilled jewelers are already artists). Second, Chao employed interesting techniques to mimic the internal structure of a butterfly’s wings. Third, Chao considered all angles of this piece. Plus, the brooch is just plain gorgeous. That’s really all there is to say about that.

(L) Front view and (R) Rear view of the brooch

I want to dive a little deeper into our second and third points, because they really highlight the intersection of art, science, and imagination. One of the most interesting things about this brooch is the attentive detail in the wings. The wings are constructed using a double layer technique. The base of the wing is set with pavé diamonds. Over that, thin slices of large-faceted diamonds are laid. The resulting optics imitate the delicate configuration of a butterfly’s wings.

Beyond the wings, Chao considered all the angles of this piece. Her grandfather was a well-known architect, famed for designing temples. She has credited him with teaching her to consider an object from all angles. Even the back of the Royal Butterfly Brooch has been carefully deliberated, with hundreds of gems of varying sizes and shapes pavé-set across the entire expanse.

She further considered another angle, which is not commonly thought of: fluorescence. We’re about to get a little science-y here, so brace yourselves. Gems get their color by the atoms in their crystalline structure interacting with the available light. As light is actually energy, what is happening is an energy reaction between the light and the electrons in the gem’s atomic structure. Color isn’t a static thing; it is totally dynamic. Color only exists in light. And this isn’t because our eyes can’t see well in the dark; it’s because without light, there is no energy with which the gem can interact. Color doesn’t exist without light. The only time this isn’t entirely true is when ultraviolet light is the energy source. Ultraviolet light, the kind given off by the sun that produces tans and sunburns, also exists in a less harmful variety, notably the kind used in black lights. Ultraviolet light is more energetic than the visible light spectrum. A gem placed in a dark space and exposed to ultraviolet light will glow, which is called fluorescence. This is because of the higher energy interaction of ultraviolet light. It takes longer for the electrons to return to their normal state, and in that time, they glow. Sometimes, that glow lasts for seconds or even minutes after the ultraviolet light has been removed. This phenomenon is called phosphorescence. The fluorescent glow that is not necessarily the color of the gem in visible light. About one-fifth of diamonds and gems fluoresce. The Hope Diamond, for example, is a deep grayish-blue in regular light. Under ultraviolet light though, the Hope Diamond phosphoresces a vibrant red. Burmese rubies, already red, also fluoresce red, so brightly, in fact, that the fluorescence can be seen in regular light.

(L) The brooch under regular light and (R) under ultraviolet light

I tell you all of this to help foster an appreciation for the stone selection process that jewelers employ. For the Royal Butterfly Brooch, Chao chose stones which fluoresce in a gorgeous array of colors. Considering the light from every angle, especially the invisible spectrum, is something that sets this piece apart from others.

I was so struck by the Royal Butterfly Brooch that is has become somewhat of an obsession for me. If you want more information on the brooch, the Smithsonian’s website has press releases and articles about it. If you want to talk to a jeweler (or jewel artist), come in to our downtown Brighton showroom and talk to André. You can call 810-225-1414 to schedule an appointment.