Gem of the Month: Aquamarine

Jurgen Henn bought the crystal from the original owner, sparing the mineral from being cut into gem-sized pieces and sold off (which would have been the most profitable thing to do). Bernd Munsteiner, a gem artist, eventually was tasked with cutting the aquamarine. Instead of simply cutting the aquamarine with facets, Munsteiner actually carved patterns into it, coaxing an image reminiscent of snowflakes on a frozen pond out of the stone. The result is an obelisk-shaped aquamarine weighing a massive 10,363 carats. The Dom Pedro Aquamarine is now on display at the National Gem Collection Gallery at the Smithsonian. 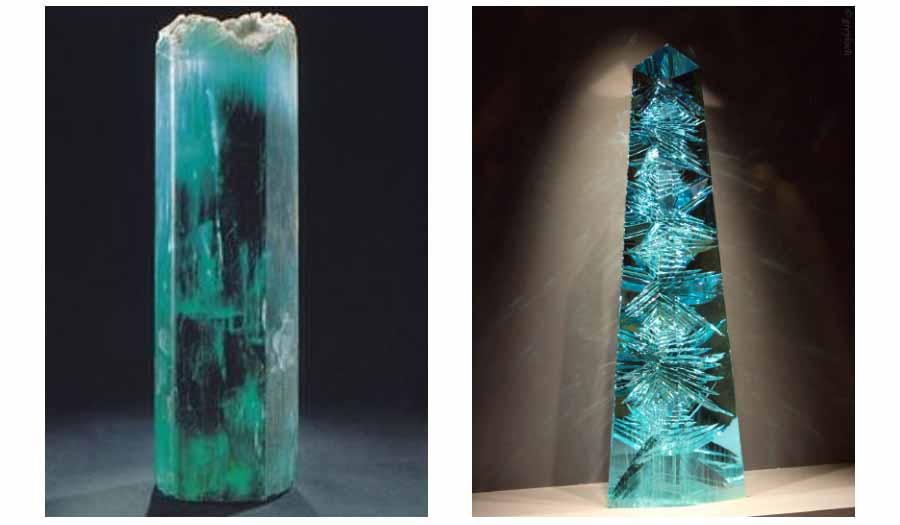 The Dom Pedro Aquamarine (L) before and (R) after being cut

Aquamarine, the birthstone of those born in March, is beryl. Beryl, when it’s a certain vibrant green, is called emerald. The name “aquamarine” is made from two Latin words: aqua (water) and marina (sea). Aquamarine literally means “seawater”. Anyone who has seen the light blue (ever-so-slightly green-tinged) gem can attest to the close resemblance to the beautiful Caribbean seawater. Oddly, it is the iron content that gives aquamarine its distinctive color. Chromium is what gives emerald its bold green color. Like all gemstones, the trace elements that are present when the gem’s crystals are forming can impact its color and clarity.

Aquamarine, like all birthstones, has a storied past. From the colossal Dom Pedro Aquamarine to humble solitaire earrings, aquamarine has long been sought after. As a beryl family member, aquamarine was though to protect the wearer in battle (whether that was war or litigation) and to promote wisdom. A bride might have found aquamarine to be the biggest fair-weather omen she could have. Aquamarine was thought to represent unity and love, potentially even reuniting lovers-at-odds. Aquamarine was also widely used in spiritual pursuits. Many people across the world believed that it was a stone that brought harmony and spiritual alignment, along with great protection. In medieval Europe, aquamarine was cut into crystal balls and was widely used in fortune telling, including by Dr. John Dee, who used it to foretell the most auspicious day for Queen Elizabeth I of England’s coronation. 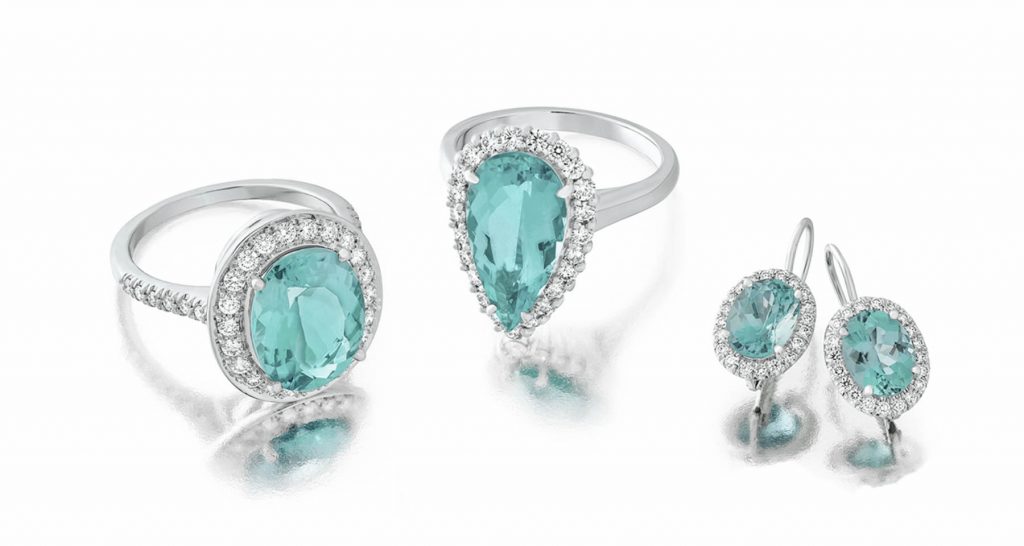 Throughout the 18th century, the greenish-blue seawater colored gems were the most desired, but in recent times, the bluer varieties are more popular, and are therefore more expensive. While aquamarine is a joy to behold in one’s eye, consider carefully before using large aquamarines as the center stone or focal point of a ring, or any other piece of jewelry that is likely to see somewhat rough wear. Keep in mind that aquamarine is beryl, which is only a 7.5 – 8 on the Mohs scale. This may sound high (considering a diamond is a 10), but the Mohs scale is like an exponential hardness rating. Additionally, the inclusions and crystal structure of beryl make it slightly more prone to chipping and cracking than some other gemstones. However, it makes a stunning addition to rings as side stones (or larger stones, if they are in a properly protective setting, like channel or bezel).

To talk to our expert designers about seeing aquamarine jewelry or having an aquamarine piece custom made, contact our downtown Brighton, MI showroom at 810-225-1414.