Gems of the Month: Pink Tourmaline and Opal

It’s a bit of a shame that February doesn’t have two birthstones…because then I could have my choice of stone. Alas, people born in February don’t have that distinction. Those lucky enough to be born in October, however, do. Although some sources say that other months have substitute birthstones, these alternates belong to the same color family as the standard. For example, December is sometimes credited as being represented by blue zircon, turquoise, and tanzanite. But those are all blue stones. June and October are special even in the elite group of multi-birthstone months. That is because they have two very distinct stones. October’s beauties are pink tourmaline and opal.

Pink tourmaline and opal are very different stones. Tourmaline is an interesting gem because instead of being a single species of mineral that comes in multiple colors due to chemical inclusions (like both emerald and aquamarine are beryl, but they occur in different colors because of the trace amounts of chromium and iron, respectively, found in them), tourmaline is a family of borosilicate minerals. There are multiple kinds of chemical compositions, but those compositions don’t relate directly back to the color that the tourmaline shows. Rubellite tourmaline is the technical name for pink (and red) tourmaline. 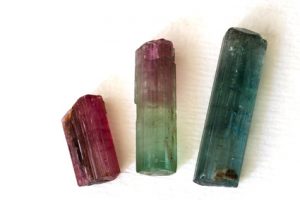 The name “tourmaline” comes from the Sinhalese word turamali, which means “gem pebbles.” Sinhalese is the language spoken by the largest ethnic group in Sri Lanka, but tourmaline is actually found all over the world, including the United States (where Native Americans used to give pink and green tourmalines as funeral gifts). A name meaning gem pebbles is a fitting name, as tourmalines are generally found in gravel deposits. This is due to the fact that while gravel doesn’t weather the elements particularly well, tourmaline does, so it is often found in larger concentrations in those areas. In terms of hardness, tourmaline ranks between a 7 and 7.5 on the Mohs scale, placing it between quartz (which you probably know better as gems like amethyst and citrine) and topaz.

Lapidaries (gem cutters) always position and cut gem roughs in order to maximize the size, beauty, and quality of a gem. For tourmaline, this means cutting the stone so that when you look down through the table (the large facet on the top of a cut gemstone), you are looking down the length of the crystalline structure. This is because tourmaline generally forms in long pencil-like prisms.

The color of pink tourmaline is quite lovely. While some pink gems, like pink sapphires, are a brighter, lighter cotton candy-like hue, pink tourmaline tends to be a bit more reserved. The classic pink tourmaline color is more of a medium-dark dusty rose color, with a pleasing depth and cool undertones.

Opal also boasts some beautiful pink hues. But opal is so much more than that. There are two categories of opal: precious and common. Precious opal is set apart because of its play-of-color. This play-of-color is caused by dichroism, which is an optic phenomenon where light enters a material and is broken up into different wavelengths of light. This dispersion gives the appearance of multiple colors against a background color (in opals, this is most often white, gray, and green) in the same material. If you have ever seen an opal, you know what I mean. Opals tend to look like they are glowing from within, with different colors being represented in an otherwise mostly-opaque (usually) stone.

Unlike the other gemstones we usually talk about, opals are not crystal growths of minerals in rock. Opals are amorphous (not crystalline) deposits of hydrated silica. While opal doesn’t have a strict crystalline structure, the spherical silica molecules are arranged in a cubic structure. It is the spherical shape of the silica molecules that disperses the light and produces play-of-color. 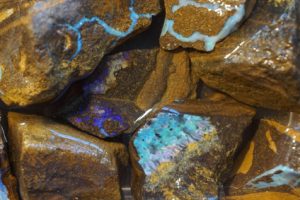 Now, as you may astutely point out, silica is a mineral that does grow in crystals. However, opals are formed from hydrated silica, meaning they contain water. The water content, by weight, can be between 3% and 21%, but it’s usually between 6% and 10%. This classifies opal as a mineraloid. So how does an opal actually come into existence? Well, the silica is picked up by moving water, where it then flows into fissures in rock – often limonite, sandstone, and basalt. When the water evaporates, the hydrated silica remains.

Australia is far and away the largest producer of gem-quality opal, although there is a lack of agreement on exactly what percentage of the world’s supply they produce. Ethiopia is another strong producer of opal. Additionally, opal is mined in Mexico (including concentrated amounts of fire opal), Nevada, Slovakia, and Czech Republic.

Opals had been considered good luck for most of human history, enjoying a very warm reception from royalty in the Middle Ages especially, who believed the opals represented all the virtues revered at the time. But opal’s association with a very unfortunate series of events in Sir Walter Scott’s novel Anne of Geierstein, coupled with the immense popularity of the book, caused opal’s popularity to plummet. The stone then experienced a backlash of sorts, with people believing it was a harbinger of bad luck. But don’t worry, October babies: since opal is your birthstone, you are protected from its bad luck and instead, are said to be the recipients of its good luck.

No matter what your fancy, whether tourmaline or opal, we have a good selection of jewelry to choose from. Or you can take a page out of my book and have something custom designed. Stop in to our showroom to take a look at what we have or to meet with our designer to make something special.