Gemstone of the Month: Emerald

By now, you should know that I am pretty in love with Elizabeth Taylor’s renowned jewelry collection. While she may have loved and married many men, jewelry was her one true love. Although her collection was varied and encompassed numerous styles and aesthetics, you can notice a pattern developing. A pattern that included glorious, mystical emeralds, one of the world’s most sought-after gemstones.

Elizabeth Taylor at her wedding to Richard Burton, wearing her infamous Grand Duchess Vladimir Suite which consists of an emerald bracelet, necklace, earrings and ring

The human fascination with emeralds goes back even farther than Liz Taylor’s most famous role – Cleopatra. Since 1500 BCE, emeralds have been mined in Egypt, but the mining was exploited by conquerors of that land, notably the Roman Empire and the Byzantine Empire. Then, in the age of the Spanish conquistadors, emeralds in vast amounts were discovered in Colombian mines. It has been those Columbian mines that have produced the majority of commercially available emeralds since that time. However, Zambia is the second largest producer of emeralds. Emerald further fascinates because modern research has shown that, by using energy dispersive X-ray spectroscopy along with color, quality of cutting, etc, we can determine not just the area, but the specific mine that an individual emerald came from. This is particularly impressive when you realize that the three largest producers of emeralds (Muzo, Cozcuez, and Chivor) are all in the country of Colombia. 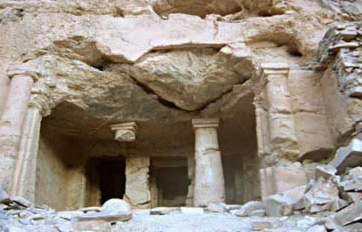 Cleopatra's Mine, one of the most famous emerald mines from ancient Egypt

Geologically speaking, emeralds are an especially lovely crystal of the mineral beryl. The crystals are found in igneous, metamorphic, and sedimentary rock deposits all over the world, on almost every continent. Beryl, in its pure form, is actually clear. Well, now, diamonds have kind of cornered the market on clear gems (and some colored ones too), not beryl. When we think of beryl, we automatically think of emerald’s lush jungle-ready hue (and aquamarine’s sky blue, if you know your colored gemstones). Why is that? Simple. Colored gems come in a kaleidoscope of color because of the things we usually associate as negative characteristics of gemstones: impurities and imperfections. Take our May gemstone, emerald, as an example. Beryl is colorless when it’s pure. While beryl is clear, what accounts for emerald’s deep, rich green color? Chromium. It doesn’t take much chromium to alter the color; it’s just trace amounts. Emeralds are sometimes colored by trace amounts of vanadium rather than chromium.

Emeralds have been used in jewelry for centuries. However, anyone who has ever owned an emerald can attest to the fragility of the stone. Emerald has a hardness of 7.5 to 8 on the Mohs scale (the scale we use to assess minerals’ relative hardness). The Mohs scale goes up to 10 (which is diamond’s hardness). When looking at a hardness of 7.5 to 8, you might be tempted to think that emeralds are pretty sturdy. But the Mohs scale increases exponentially, although not in even amounts. The reason for this is because the Mohs scale pits minerals against each other when evaluating their hardness. A mineral is rated on the Mohs scale for its ability to scratch other (softer) minerals. This makes it somewhat imprecise, but the scale gives geologists (and gemologists) useful information. Each mineral is also rated with an absolute hardness, which is a more standardized measurement. In that scale, diamond is a 1500 and emerald falls somewhere between 100 and 200. That is a big gap. For reference, corundum (which is your sapphire family…including ruby, by the way) is a 9 on the Mohs scale. Quartz (amethyst, citrine, etc) is only a 7. And yet, quartz is used all the time in jewelry without incident. With emerald technically being harder, why is it more fragile? 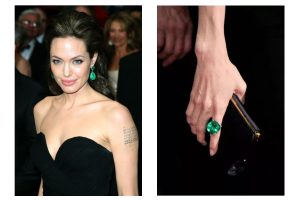 A modern fashion icon, Angelina Jolie is famous for her emerald jewelry

The answer to that very good questions is inclusions. Emeralds are often included. This means that they often have other materials embedded in the crystal structure. This disrupts the crystalline structure, weakening it. What this means in jewelry application is that emerald is prone to breaking, chipping, and cracking along the fault lines of the weakened crystalline structure. It is for these reasons that we don’t generally recommend emerald for things like the center stone of an engagement ring. An engagement ring, being worn on the hand, is likely to get bumped around quite a bit. A diamond, being the hardest mineral on Earth, are much better suited to taking the abuse an engagement ring endures. However, emeralds are beautiful stones that make excellent earrings or pendants. Those two types of jewelry don’t move around a lot or bump into anything that could harm them. If you love emeralds, but you’re not sure how to use them in a way that will showcase their beauty but promote their protection, make an appointment to meet with our expert jewelers. To book your appointment, call our downtown Brighton showroom at 810-225-1414.