Gemstone of the Month: Peridot

If you asked the average person on the street to name the first green gemstone that comes to mind, they would probably reply, “Emerald!” And while emerald is a beautiful green gem, those born in August are likely to answer your query differently…with their birthstone, peridot, a rich and vibrant green hued gemstone.

Peridot comes in a variety of green hues, ranging from a sunny lime to a dark green to a brownish green. The word “peridot” is a French word that is thought to have been derived from “faridat,” an Arabic word that means “gem.” This makes sense, considering the main source of peridot for ancient Mediterranean peoples was an island in the Red Sea, which is now called St. John’s Island. I’ll give you a high-five the next time I see you if you can guess which Mediterranean civilization had a famous ruler closely associated with green gems. 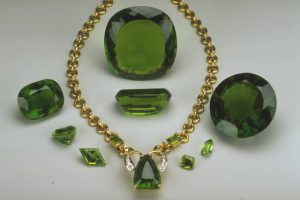 Photograph of a group of peridots from the National Gem Collection including the worlds largest faceted peridot, a 311.8 ct cushion cut gem mined from St Johns Island, Egypt - Courtesy of the Smithsonian Institute

If you guessed ancient Egypt and Cleopatra, you are absolutely correct. Cleopatra’s association with the green gem emerald is widely accepted and understood. When you look at an emerald, you can see that emerald generally has a bluer tint to it, while dark green peridots, which are the most valuable, have a yellower tint. But that difference in tint has not prevented centuries of confusion between emeralds and peridots. In fact, modern academics now believe that Cleopatra’s famed collection of emeralds was actually a superb collection of valuable dark green peridot. Whatever the identity of Cleopatra’s green stones, peridot has been used in jewelry since its discovery and early mining around 300 BCE.

There is another famous incident of peridots masquerading as emeralds. In Cologne, Germany, in the Cologne Cathedral, a lavish shrine sits behind the altar. This shrine is the Shrine of the Three Kings (it has multiple names, but this one is most common). This shrine was said to contain the remains of the Three Kings (the ones referenced in the recounts of Jesus’s birth). In 1864, the shrine was at last opened and its contents examined. Now, I have read differing reports. Some eyewitness reports say that bones from three distinct people were in there, while other reports indicate that the remains belonged to Philip I, the Archbishop of Cologne. Either way, the remains (and coins belonging to the Archbishop, which were also found in the shrine) were replaced in the shrine. Now, the shrine is decorated elaborately, including five colossal peridots sitting along the top. Each stone weighs in at 200 carats. However, for centuries, those peridots were thought to be emeralds. It wasn’t until long after the shrine had been built that the true identity of the gems was discovered.

For all of its confusion with emerald, peridot is interesting and under-revered, I think. First of all, it is one of the few minerals that comes in just one gem-quality color. Olivine, the “parent” mineral of peridot, is always green (although the amount of iron can give it the brownish/reddish tint as iron oxidizes, or rusts). And although there is wonderous variety in hue and tint, all olivine, and therefore peridot, is some form of green. This is pretty rare in the gem world. There are only a handful of gems that only come in one color. For example, the mineral beryl gives us green emeralds and blue aquamarine. Corundum gives us red rubies and a rainbow of colored sapphires. But olivine gives us just striking green peridot. 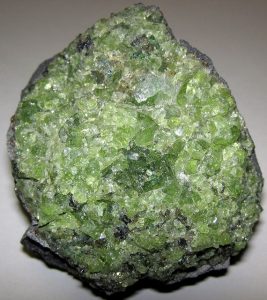 Olivine is actually quite abundant in the Earth. It is found in igneous and metamorphic rock and it is thought to comprise around 50% of the Earth’s mantle (below the crust on which we stand). Olivine is brought to the surface by volcanic means. However, once it is on the surface, it weathers quickly. Large crystals of the olivine variety forsterite are the crystals used to cut gem quality peridot. But these crystals are very rare, making peridot a precious gem.

With high quality peridot being rare and precious, one might think that it would be incredibly expensive. However, like sapphire, which is far rarer than diamond, where there isn’t a strong demand, there isn’t as high a price. I like peridot because I find the color refreshing and bright, exuberant and modern. I love the lemony yellow tint of peridot. For the discerning jewelry lover, consider a pendant or ring featuring a peridot. And if you cannot find the right piece of peridot jewelry, remember that our specialty is custom design. The experts at Andre’s Fine Jewelers can create your dream peridot piece. Stop into our showroom for a custom design consultation.