Gemstone of the Month: Ruby

If we were asked, we could all think of a few “rubies” in popular culture; Dorothy’s ruby slippers (which will be returning to display at the National Museum of American History in Washington DC, after an 18-month restoration sabbatical), for example. Another well-known ruby is the Black Prince’s Ruby, which is set in the Imperial State Crown as part of the British Crown Jewels. I mean no respect to Dorothy, but I find famous ruby gemstones infinitely more interesting, especially when one of the most famous rubies in the world isn’t even a ruby at all. 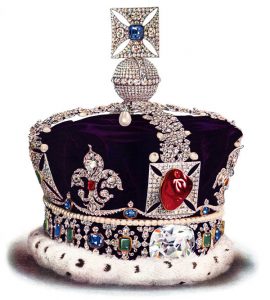 That’s right: the Black Prince Ruby (which was given to Edward, Prince of Wales back in 1367) is actually a balas, or spinel. Since rubies have been mined since the eighth century BCE and because humanity’s technology has gotten decidedly more advanced since the days of the Black Prince, it’s not a stretch to see why other deep red stones are mistaken for rubies (garnets and spinel are the most common imposters). Ruby varies from garnet and spinel in its color, as well as its chemical and mineral composition. Rubies often have a touch of a purple hue, as opposed to the brown tint usually found in red garnets. No matter what color a stone is, we can easily tell the difference between rubies and other red stones by looking at their spectrometer readings. 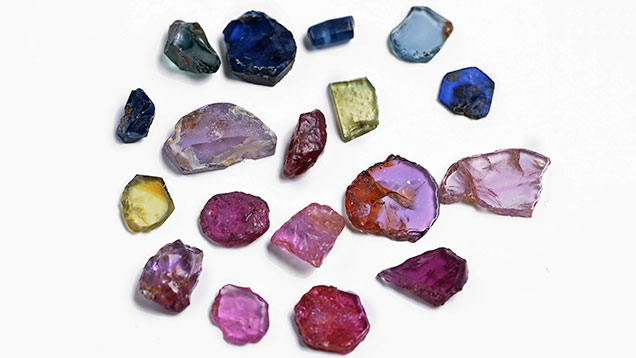 Rubies are red corundum. If “corundum” sounds familiar, there is a reason. Corundum is sapphire. Most sapphires other than blue are just called “other color” sapphire, like pink sapphire, yellow sapphire, etc. But not ruby. Red sapphire is called ruby. And it is incredibly valuable, since finding stones that are high quality color, high quality clarity, and large is terribly rare. The color of a ruby is the foremost characteristic that commands a high price. If a specimen is too dark, it’s not as valuable. If it’s too orange, it may fall down the color ladder to “orange sapphire” territory. Likewise, if it’s too pale, it may be graded as a pink sapphire, and not a ruby at all. Grading rubies might seem like a too-subjective endeavor, but the when grading rubies, the GIA, for example, uses a set of masterstones in a controlled white environment to grade the individual stones (just like they do for diamonds). To be officially considered a ruby, the dominant color needs to be red, as opposed to orange, purple, or pink. The most highly-valued of all rubies are pigeon blood rubies, which are a rich, vibrant red color, with high saturation and vibrancy.

Where the color is the most important value-setting characteristic of ruby, clarity is another driving factor. While no jeweler or gemologist expects ruby to be perfectly clear (rubies with no inclusions are, for all intents and purposes, non-existent), the location and size of inclusion greatly informs the clarity rating, and therefore value. In fact, some fine needlelike inclusions are called rutile silk. This silk can help diffuse light and brighten the appearance of darker stones. 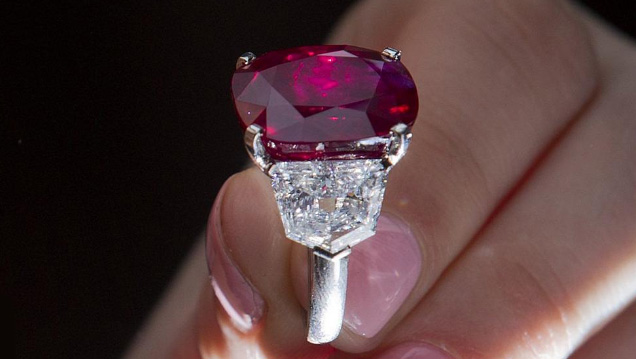 The most expensive gemstone other than a diamond, the Sunrise Ruby, was mined in Myanmar. The ring sold at auction for 30.4 million dollars in 2015

As you would imagine with a red stone, ruby has a fiery story. Humanity has been mining rubies for centuries. Some of the best specimens come from Myanmar, or Burma, as it used to be called. In 2008, the United States placed an embargo on rubies and jade imported from Myanmar. This ban (coupled with the fact that two prominent ruby mines in Myanmar weren’t producing much), while lifted in 2016, drove the price of Burmese rubies sky-high, with some going at auction for $1 million per carat.

Things have settled down in the ruby trade now (with Burmese rubies still fetching a pretty price), but ruby has always had a flamboyant way about it. Folklore and legend holds several charming tales of ruby’s power (as you can see, I view gem legends rather dubiously). These stories run the gamut from ruby representing love and romantic passion to ruby protecting warriors (to the extent that some ancient warriors would actually cut their forearms and slide the stones underneath) to ensuring greater destruction of enemies (including bullets containing rubies…this myth apparently persisted until the early 1900s, as bullets from that time have been found to contain ruby).

Some of ruby’s lore no doubt stems from its unique appearance. Some rubies glow…and that feature has captured the imagination and fascination of people for centuries. That other-worldly glow actually has a scientific, rather than mystical, explanation: fluorescence. Fluorescence is, basically, when the electrons of certain atoms in the mineral structure absorb ultraviolet light and release it over time. For most gems, that “over time” is a period of time so small that it appears to be over as soon as the ultraviolet light source is removed. Because of this, these stones’ fluorescence is best seen against a black background with a UV light source as the only light source. But rubies are different. Unlike other gems, ALL rubies fluoresce to some degree. But Burmese rubies glow. Their fluorescence is so strong that they appear to glow even in normal daylight conditions. This feature just adds to Burmese rubies’ value, cost, and desirability.

If rubies sound like your cup of tea, we have some beautiful specimens in our showroom. Call the downtown Brighton showroom at 810-225-1414 to book an appointment to see our ruby jewelry or to talk to our expert jewelers about creating a piece of custom ruby jewelry.