Gemstone of the Month: Sapphire

Poet and playwright Oscar Wilde said of sapphires, “The sapphire shall be as blue as the great sea.” And that’s mostly true. A deep, rich blue is the color most often associated with the gem sapphire. But that’s not the end of the sapphire’s story. Sapphire occurs in all the colors of the rainbow, from colorless and clear to dark and stormy.

In all fairness to Oscar Wilde, I may have been picking on him a little. Because although all sapphire is corundum, when we say “sapphire,” everyone assumes we are talking about the blue variety. And that is because blue sapphire is one of only three varieties that has a name that doesn’t follow the traditional naming formula. Most other colors of sapphire are called “________ sapphire,” with the blank being their color. For example, yellow sapphires are simply called “yellow sapphire.” While not particularly inventive, this naming system does eliminate the need for us to memorize dozens of specific names for the sapphire colors. In case you’re wondering (and I would), the other two varieties that don’t follow this naming pattern are ruby (which would otherwise be known as red sapphire, I suppose) and padparadscha (which is a lovely orangey-pink hue, often striated).

The three named varieties of corundum (from left to right), padparadscha, sapphire and ruby.

Before we move on, a quick side note on pink and red sapphires: as you might imagine, pink and red are parts of the same sliding scale of color. Sometimes, when a stone falls into that awkward middle ground, disagreement about whether a stone is a pink sapphire or a ruby can pop up. According to Aja Raden, who wrote the incredible book Stoned: Jewelry, Obsession, and How Jewelry Shapes the World, the deciding factor separating pink sapphire from red ruby is what the “largest” color present is. If the stone is more pink than it is red, it is considered pink sapphire. If it is more red than pink, it’s a ruby. 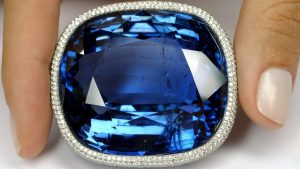 The largest faceted sapphire, a 486.5ct stone named The Blue Giant of the Orient, is also a member of the Ceylon sapphire family

Sapphire is the gem-quality form of corundum. Corundum is the third-hardest mineral on Earth. The Mohs scale, which is a scale that rates the relative hardness of minerals, ranks corundum at a nine. Diamond, the hardest mineral known to man, is a 10 on the Mohs scale. In between diamond and corundum is moissanite, which is ranked 9.5. Now, if moissanite sounds vaguely familiar, that’s because as of the 90s, it has been marketed for use in jewelry, owing to its white color and far lower cost than diamond. Although it is a naturally occurring mineral, the moissanite used in jewelry is almost exclusively lab-created, making it far less expensive than diamond.

While we’re of the subject of comparing diamonds and sapphire, here is something else that you may find interesting: sapphire is actually far less common than diamond. However, because the demand for sapphire is nowhere near that of diamond, it cannot command the same price tag. What we can take away from this is that the value of something is not just in how rare and how beautiful it is. It also needs to be greatly desired. It’s essentially the gem equivalent of the supply and demand economic principle.

However, like diamonds, and all gems for that matter, higher quality stones fetch higher prices. One of the characteristics used in determining gems’ quality is the clarity. The clarity refers to inclusions, the small imperfections and materials/minerals/elements/etc that get trapped in the gem’s crystalline structure as it’s forming. Usually, the presence of inclusions pulls down a gem’s quality, and therefore price. However, some inclusions are very rare and beautiful, making them desirable in their own right. Sapphires and rubies specifically come in a lovely variety that can be very valuable. Sometimes, intersecting inclusions of rutile form in the crystal. These inclusions have a star-shaped appearance. When the stone is polished, they are called “star sapphire” or “star ruby.” These stones’ natural beauty is best showcased by cutting the stone en cabochon, which means the back is cut flat and the top is domed and polished smooth. There are no facets in a cabochon stone. Here’s another fun fact: film star Jean Harlow asked her fiancé, William Powell, for a star sapphire engagement ring, rather than a diamond ring. She wore it in the movie Personal Property, which was actually her last film before passing in 1937. 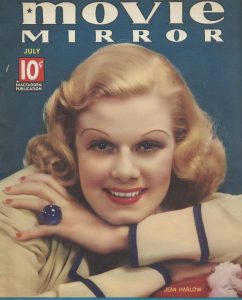 There are many famous pieces of jewelry featuring sapphires. My personal favorite is one of the pieces housed by the Smithsonian National Gem Collection (and you know how much I love that place). The piece I’m referring to was the gift of Mrs. Evelyn Annenberg Hall in 1979. I would love to describe it to you in my own words, by the National Gem Collection book I bought at the museum does a much better job:

An exquisite necklace designed by Harry Winston, Inc., features thirty-six matched sapphires (totaling 195 carats) from Sri Lanka. Their soft, sky blue color is set off by a sea of 435 pear-shaped and round brilliant-cut diamonds (totaling 83.75 carats). 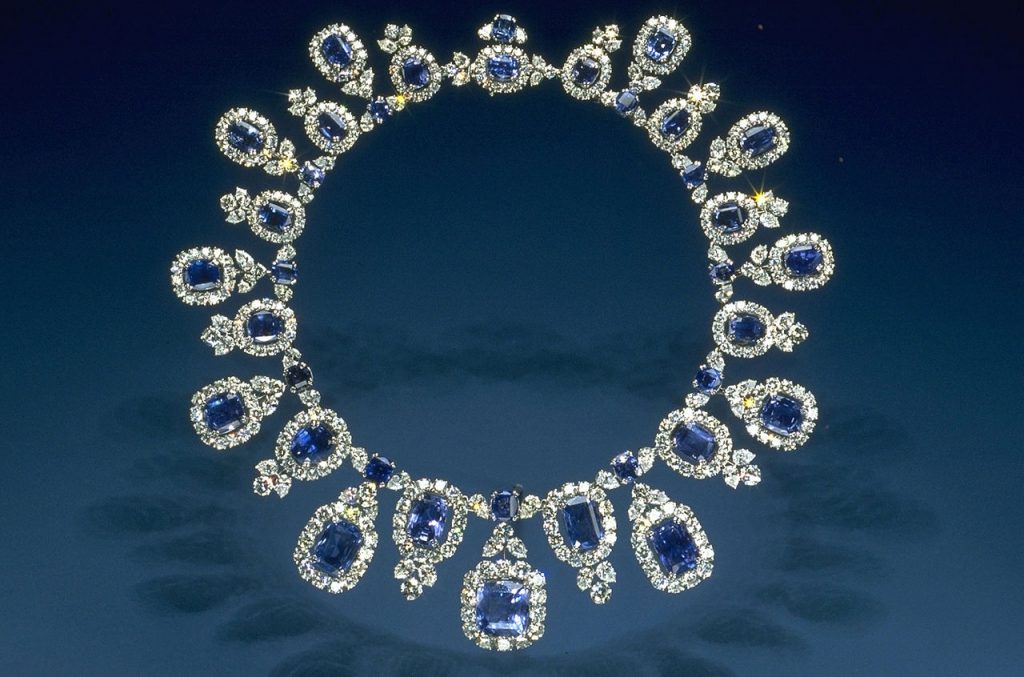 The famed Hall Sapphire and Diamond Necklace dontated to the Smithsonian in 1979 by Mrs. Evelyn Annenberg Hall

Sapphire, in my opinion, is one of the most lovely gems in existence. And while it may not have the clout or reverence afforded some of the other jewels around the world, remember that it is rare and it is hard…and it has a beauty all its own, as Oscar Wilde put it, “…as blue as the great sea.”