Gemstones of the Month: Alexandrite and Pearl

Most people can only lay claim to one birthstone. But lucky are those who are born in June (and October). Those fortunate folks have the chance to choose between two birthstones. June babies get alexandrite AND pearl. If you ask me, June gets the edge for better birthstone pairings over October (which is pink tourmaline and opal, but we’ll get to that in a few months).

Alexandrite has fascinated me since I began learning of about fine jewelry and gemstones in college. Alexandrite, per carat, is actually one of the most expensive gemstones in the entire world. More than emerald. More than sapphire, ruby, and even diamond. Alexandrite’s luxury pricing is owed to it’s rarity. You see, alexandrite is a very specific color of chrysoberyl. Chrysoberyl (which, although it contains beryllium, is not at all related to beryl, which you know better as emerald and aquamarine) is a mineral crystal that is uncommonly found in gem-quality specimens. In fact, many jewelers don’t even stock chrysoberyl because it is largely unheard of (except during the Victorian era, when it was called chrysolite, which was what peridot was also called). While chrysoberyl is rare, alexandrite is even more elusive.

What makes alexandrite special is its color properties. All gemstones interact with light. It is their interactions and relationships with light that give them their unique and special colors. Different kinds of light affect gems differently. Some gems, owing to their chemical and crystalline structure, fluoresce under ultraviolet light (if you have ever seen any of your gemstones or diamonds glow like a neon Christmas tree under a black light, you know what I’m talking about). Some gems have an even more unique relationship with light. Burmese rubies for example, fluoresce so strongly that it can be seen in normal light. That’s why those stones seem to subtly glow, even in the middle of the day. Alexandrite has a similar special relationship with light. When viewed in daylight, high-quality alexandrite appears a bluish green. However, in tungsten light (so pretty much any artificial light, like incandescent or halogen light), alexandrite is distinctly a vibrant purplish red. This color-shifting property is caused by the chromium in the crystal. The chromium (which is what makes emeralds green) makes the gem appear green in sunlight, where a full spectrum of light is available. However, as the lighting conditions change, and you move from daylight, which contains all the light wavelengths, and into a home let’s say, where the artificial light has a smaller variety of light wavelengths (notably, a reduced amount of green and blue wavelengths), the gem cannot reflect all the color, altering the way our eyes see it. This makes alexandrite appear purplish red in incandescent or halogen light. It’s fascinating.

Alexandrite was discovered in the Ural Mountains fewer than 200 years ago. It was named after Russia’s Alexander II. Supposedly, the gem was discovered on his birthday. I’m not sure if that is true, but I do know that the very best alexandrite specimens are found in that region. Unfortunately, those mines don’t produce many gems beyond one carat in weight anymore. Actually, those mines are not producing as much volume (in any carat weight or quality) as they used to either. Alexandrite has been found in other places around the world, like Sri Lanka and the United States, but the Ural stones are the best. Where the Russian stones are a bluish green and purplish red, the Sri Lankan stones, for example, are a more yellowish green (in daylight) and a brownish red (in artificial light). While still valuable, Sri Lankan stones are not as valuable as Ural stones (or other alexandrites that have the same color and vibrancy properties that Ural stones tend to exhibit). However, Sri Lankan alexandrite stones tend to be larger than stones from Russian mines, but with less desirable color characteristics.

The Phoenix Alexandrite Pendant was created by The House of Faberge. The Faberge family is most well known for the Faberge Eggs they created for the Russian Tsars

I could go on and on about alexandrite, but that would leave half of my job this month undone. You see, because alexandrite is quite expensive, it isn’t always the most practical choice for June babies wanting birthstone jewelry. Luckily for them, there is an alternative: Pearl. Pearls are unique because unlike all the other birthstones in the calendar, they are an organic gem. Organic gems are those made from naturally occurring plant or animal material, rather than minerals. You’re likely familiar with some other organic gems that are frequently used in jewelry, like coral, amber, jet, and mother of pearl (which is made of the same material, nacre, as a pearl, but is deposited differently by the mollusk). 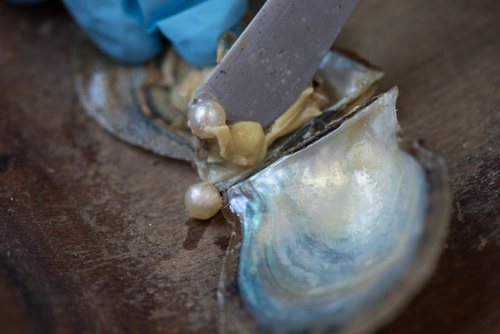 A pearl being extracted from a mollusk

Anyone can see, plainly, the beauty that lies in pearl’s glowing luster. That iridescent luster comes from the nacre, which is what pearls are made of. But science hasn’t fully grasped the subtleties of nacre formation. We do know that nacre is made with hexagonal argonite platelets. The thickness of these platelets is close to the wavelength of visible light. This means that light is broken apart into colors within the platelet structure, resulting in a soft iridescent luster. We do know that certain mollusks (oysters and freshwater mussels) make nacre. Nacre is a protective coating produced by the epithelial cells in the mantle of the bivalve. This nacre eventually coats the inside of the shells of many of these bivalves. And sometimes, often where there is an irritant or tiny piece of debris, the mollusk secretes layer after layer of nacre, encapsulating the foreign object. These pearls can either be bumps, essentially, on the inside of the shell, or they can be free-floating pearls in the mantle tissue of the animal. Nacre production, and therefore pearl production, will continue as long as the mollusk lives. Because it is a time-consuming and organic process, finding large high quality pearls is a very rare occurrence.

The value of pearls is further affected by their color. Creamy white pearls are the most common, and therefore the least expensive (although, good pearls will still be pricey). As the colors (pink, purple, peach) move towards black (which is really more of a dark warm gray color), they get more expensive and more uncommon. I myself am an enormous fan of pink pearls. The soft blush color is flattering to all skin tones and pearls feel nice to wear.

Some of the most common color variations of pearls

Beautiful jewelry can be made using so many different materials, from minerals to organic compounds. If you are a June baby, you have your choice of two of the most gorgeous gemstones available: alexandrite and pearl. No matter which you choose, our expert jewelers can help create a custom piece of jewelry featuring your preferred June birthstone. Call our showroom (810-225-1414) to set up an appointment today!