Rock to Ring: How Gemstones are Mined, Part One

It’s a long road from rock to ring. The gemstones we use in jewelry, whether the whitest diamond or the most glowing Burmese ruby, all have to be mined from the Earth. Most gems are cut from the crystals growing on rocks. These crystal-bearing rocks are found all over the Earth, although not uniformly. So what does it take to go from a rock in the Earth to the perfectly polished and sparkling gem on your finger? 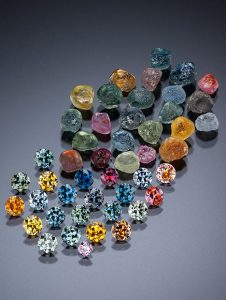 We’ll spend a couple of blogs unearthing (I couldn’t resist the pun) the complex process of mining and refining gemstones, including diamonds. We’ll start the series with the mining of the stones, the actual physical removal of the stones from the Earth. While the exact processes used for different types of stones vary based on those stones’ unique location, type, and rarity, most gemstone mining operations fall into one of several categories.

Pipe Mining: This type of mining is used for most diamond mining operations. It is called pipe mining because diamonds are found in rock called kimberlite. The kimberlite layer of rock starts about 15 meters beneath the surface of the Earth. There are two ways mining operations get to the pipe deposits. First, they can use an open pit. In an open pit mine, layers of rock and other material are cleared away. A large hole is dug until the pipe is exposed. Trivia side note: the largest man-made hole (although this claim is disputed by some) in the Earth is the Kimberley Big Hole diamond mine in Kimberley, South Africa. The mine was closed to mining operations over 100 years ago, but in the 1960s, it opened a diamond mining museum. Then in the early 2000s, De Beers put millions into revamping the entire mine into a tourist destination. Back to the mining. Once miners have exposed the pipe, explosives are used to break up the kimberlite rocks layers. The rock, which has been reduced to more manageable pieces, is taken by excavator or other large machinery to an extraction plant, where the kimberlite ore is first crushed into much smaller pieces. We can do this with diamonds because they are the hardest naturally occurring material on the planet. While they can (and do) break, they can withstand this operation in a way that other mineral crystals cannot. Pipe mining is also done by cutting and digging two parallel tunnels (connected by perpendicular tunnels) through the earth until the pipe is reached. Then the ore is blasted and it settles through the perpendicular tunnels into the lower of the two parallel tunnels. Then machinery is used to clear the ore from the mine. The ore then goes through the same processing as the pipe-mined ore. 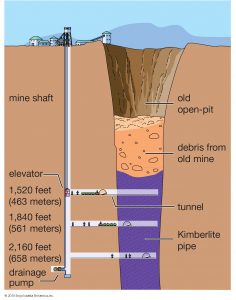 An illustration of a typical pipe mine

Alluvial Mining: Alluvial mining is mining that follows water. We know that gemstones are found in rock deposits under the surface. However, we also know that, due to the wonders of geology, these gem-bearing rocks make their way to the surface, where they often meet with water. Because of their density, the rocks often collect near sources of moving water, like rivers, creeks, and streams. These river beds, plus valleys that once had water moving through them, and even deltas where rivers wash out to the oceans, are all good candidates for alluvial mining. Alluvial mining starts by first diverting the natural course of the body of water. Once the water is pumped out, machinery can come in and dig until the kimberlite ore is reached (usually at 15 meters down). This ore material is then taken for further processing. There is another type of alluvial mining, which is artisanal mining. Now, there are other names for this type of mining, like panning. If you think “panning” sounds familiar, you’re right. Artisanal mining follows essentially the same process as panning for gold. Ore-rich material is scooped up and washed through water, exposing the gemstone crystals. 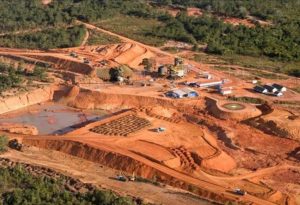 In the United States, there is only one operational diamond mine (diamonds aren't exactly our bread and butter) currently. At the Crater of Diamonds State Park in Murfreesboro, Arkansas, you can actually dig and pan for your own diamonds. In fact, Crater of Diamonds is the world’s only diamond-producing site that is open and accessible to the public! Several hundred carats of diamonds are discovered each year by tourists. For a small fee, you and your friends/family can keep whatever diamonds you find. While you’re not likely to find a large, jewelry-grade diamond, the experience is fun. And let me tell you, if I found a diamond that was even moderately sized, I would have it made into a piece of jewelry no matter what the quality was. Because it’s a diamond. And I found it.

When we pick this series back up, we will discuss the polishing and cutting process of gemstones.