One of the first things to come to mind when you hear the words “princess,” “queen,” or “empress” is a tiara. The gem-encrusted headpiece is easily the most recognizable symbol of royal splendor and wealth. The finery of the upper class consistently captures the attention and admiration of the common riff-raff among which we count ourselves. And to the tiara we are drawn like moths to a flame. If you are like me and are oddly intrigued by royalty (and all the outward superficialities, like clothes, handbags, and jewelry), the Smithsonian can give you what you seek. In the Janet Annenberg Hooker Hall of Geology, Gems, and Minerals, which was established in its current form in 1997, many of humanity’s most important gemological (read:jewelry) specimens are housed as part of the National Gem Collection.

This collection is comprised of breathtaking pieces of jeweled art from across the globe. Most of the pieces have changed hands numerous times before being gifted to the Smithsonian. One such piece is the Marie-Louise Diadem. Before we get too far into this piece and what makes it so special, let’s take a few minutes to dissect the terms used to define jeweled headpieces.

I used to think I knew what I was talking about when it came to headpieces. Well, as I discovered in writing this blog, I was wrong. I don’t know as much as I thought I did. But I will save you my embarrassment and tell you what I have learned. I used to think that crowns, diadems, tiaras, coronets, etc, were all distinct kinds of headwear. Turns out, there aren’t as many differences as I thought and a lot of the differences you read about are manufactured and are a matter of semantics only. And dictionaries and encyclopedias are not helpful, because they describe most of the terms in such vague language that any subtle differences are eaten up by the broad, sweeping terms.

There is one term that has one very important distinguishing characteristic: crown. A crown is a headpiece worn by the crown royal. It is specific to the sovereign. Crown also follow a typical shape. Crowns are full circles, worn on the top of the head, with arches that meet in the center, at the top.

Additionally, crowns are usually personally owned by the sovereign, as opposed to owned on behalf of the monarchy (think about it this way: Queen Elizabeth II owns some pieces of jewelry herself, much like you and I do, while others are owned on behalf of the British monarchy and people; these are referred to as the Crown Jewels). The style and specifics of a crown often denotes the importance or station of the wearer. Here’s another fun fact: the circular crowns were made in sections, attached with pins. These removable pins allowed the crown to be adjusted to fit, as well as broken down in smaller pieces for easier transport. I can’t imagine needing to break it down to transport it; if I had a crown, I would be wearing that beauty all day, every day. 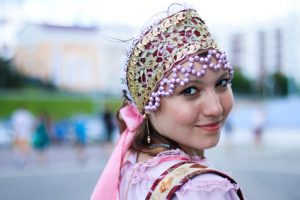 So crowns are specific to royalty. Additionally, they are circular. So what about tiaras, diadems, etc? Turns out, the broad term for a jeweled headpiece is a diadem and there are sub-categories. Just like we have sedans, hatchbacks, coupes, and convertibles…but they’re all cars. And just like confusion surrounds the idea of an SUV vs crossovers vs “small SUVs,” the diadem sub-types remained mired in confusion and debate.

Tiaras are considered a very feminine type of headpiece. A male sovereign isn’t going to be wearing a tiara. But a lady will. Additionally, tiaras, as a general rule, come to a point and the top and taper down the sides. Also, they usually have some sort of clasp or connection in them, and are not fully circular. This is because they are often incorporated into elaborate hairstyles or are converted to necklaces. Many tiaras, especially the Russian kokoshnik style, are able to be converted into necklaces. I could go on and on about kokoshniks, but that is another topic for another day. 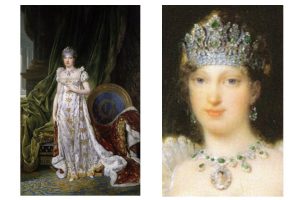 Marie-Louise wearing her emerald parure, or jewelry suite in an official portrait (left) and enlarged to show detail (right)

Where a tiara isn’t circular, owing to its functionality and utility, a diadem is usually much closer to a complete circle (usually at least ¾ of a complete circle). A diadem is often confused for a crown. But a diadem is worn by non-sovereigns. That is the case with the Marie-Louise Diadem. This gorgeous piece, which features a scroll, palmette, and medallion motif, was a gift of Napoleon to Marie-Louise. It is thought that he gifted it to her on the occasion of their marriage. What you see of the diadem today is not how it appeared when Marie-Louise took ownership of it. When it was commissioned in 1810 and made by Nitot et Fils of Paris, the diadem, made of gold and silver, was part of a parure (which is a fancy way of saying “a jewelry suite,” which is a set containing several pieces, usually some combination of two or more pieces - necklace, earrings, bracelet, ring, or headwear) that also contained a necklace, earrings, and haircomb. Sadly, the haircomb has since been disassembled, but the necklace and earrings are on display at the Louvre. In its original state, the diadem consisted of over 1,000 mine-cut diamonds (over 700 carats) and emeralds. Yes, emeralds, not the turquoise that currently resides in the diadem.

Upon Marie-Louise’s passing, the diadem and the remainder of the parure were left to her aunt, whose descendants then sold the diadem to Van Cleef & Arpels in 1953. From 1954 to 1956, Van Cleef & Arpels removed the emeralds from the diadem. They were sold off in other individual pieces of jewelry, under an advertising campaign relying on the “royal emeralds for YOU” idea. At some point between 1956 and 1962, Van Cleef & Arpels mounted 79 Persian turquoise gems (over 540 carats) from Iran in the vacancies left by the removed emeralds. After being on display with the rest of the parure in 1962 at a Marie-Louise exhibition at the Louvre, the diadem was purchased from Van Cleef & Arpels by Mrs. Marjorie Merriweather Post (heiress to the Post cereal fortune); she then donated the diadem to the Smithsonian in 1971. It was there that I was able to fawn over this beauty.

This is my last installment for our Smithsonian series. Sad, I know. But all good things must come to an end. If you’re not ready for the Smithsonian series to end, I suggest taking a trip to our nation’s capital to visit the Janet Annenberg Hooker Hall of Geology, Gems, and Minerals. The National Gem Collection contains more than what is on display at any given time, so pieces are rotated in and out. If you don’t get to see the items we’ve highlighted in the series, you can still be sure that you will see things that will beguile, enchant, and tease your senses.