The Earth’s Bounty: How Gold Is Mined and Refined

Gold mining has been a historically significant source of lore for centuries. The earliest gold artifacts were found in the Varna Necropolis graves in Bulgaria, dating back to the mid-4000s BC. In more recent times, in the United States, just about everyone is familiar with the concept of the California Gold Rush in the mid-1800s. At that time, gold nuggets could be obtained by simply grabbing a handful of riverbed rock. But that is no longer the norm. However, gold mining today operates on much of the same principle as in the old days, but the scale has changed some.

To best understand the gold mining process, you need to first understand something about gold. Gold, which is represented by the symbol Au on the periodic table, is a very dense metal. Gold weighs 19.3 times more than water. To put that in terms that can be appreciated, consider this: a gallon of water weights just over eight pounds. A gallon of gold weighs around 160 pounds!

Because of gold’s density, it is often found in or near rivers, creeks, and streams (as well as the dried up riverbeds of ancient bodies of water). As these rivers and creeks spent eons cutting through the earth and landscape, the current picked up gold deposits along the way. Eventually, the current also cut the riverbed down to bedrock in many places throughout the water’s path. The exposed bedrock, which is a very hearty material, affects the water’s current as it passes above and around it. Since the flow of the water slows in many of these areas (this same phenomenon is also observed when rivers change course and there is a bend in the river), the gold’s density causes it to fall out of the current and into the small cracks and crevices in the bedrock.

A gold miner’s job is to find where there is likely to be gold and get it out of the ground. One of the oldest and most common ways to do this is panning. Panning is the mining method which is the most manual, but is also the most cost effective. When panning for gold, a large shallow bowl, usually with “steps” around the sides is plunged into the earth, scooping up small pieces of bedrock, gravel, sand, and other material that might contain gold. Water is added to the pan and the miner will vigorously shake the pan, loosening the material and shaking the gold out to the bottom. This whole action strives to mimic a river’s water current in depositing gold into the riverbed. The panner will then carefully and systematically shake out some of the dirt on the top “steps”, repeating this action until all that is left are gold flakes (and nuggets if he’s lucky) in the pan.

One of the most popular commercial gold mining methods utilizes these same principles too. Large loads of “paydirt” (the ground material likely to contain gold) are lifted into wash plants. Sprayers use jets of water to mix with the dirt and rock to loosen it from the gold. The material is filtered for rocks, which are hauled away on a conveyor belt, and the remaining material (fine particles of dirt and gold) is run through a sluice box. The sluice box is an inclined plane with mats over riffles, which are essentially long horizontal bumps in the box. Again, this process mimics the river coursing over the bedrock in the natural landscape. The gold’s density causes it to fall in the riffle mats, which are removed for the routine “clean ups.” The mats are filtered and further cleaned to reveal the pure gold.

The cleaned-up gold is then refined further using one of several chemical extraction methods. Mercury refining can be used to extract the very small particles of gold that the initial clean ups couldn’t access. As elemental gold is soluble in mercury, the gold ore slurry is passed over mercury-covered plates. The mercury and gold combine to form an amalgam. This amalgam then undergoes filtering and finally heating in a specialized vessel, which distills the mercury, leaving just the gold. Unfortunately, the mercury refining process is harder on the environment, so it is not used as the primary gold recovery method. 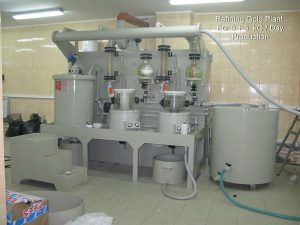 The most effective gold recovery and refining method is cyanidation. In this method, gold is oxidized by atmospheric oxygen and dissolved in a cyanide solution (the ore materials and materials are left). Depending on the gold-bearing quality of the ore, the gold ore is either placed in a leaching vat and agitated (high-content ore), or a heap, allowing the solution to trickle down through the heap (low-content ore). Now, the downside to this process is that there is a lot of overhead required for the vats. To make the process more cost-effective, ingenious alterations have been made to the process. For example, granular carbon is added to the slurry, which attaches to the soluble gold. This allows the carbon chunks to be removed and refined, leaving behind the cyanide solution for future use. The gold solution is then deoxygenated and passed through a zinc filter.

These methods are not the end though. They actually produce a gold-laden slurry with other metallic impurities. The gold slurry needs to be purified further in order to be used in jewelry or other applications. The final refining process is done in one of two primary methods: the Miller method and the Wohlwill method. The Miller method is far faster and more simple, yielding 99.95% pure gold. The Miller method heats the refined gold ore to gold’s melting point (or higher). Then chlorine gas is blown into the chamber. At those high termperatures, the ore’s impurities combine with the chlorine gas more readily than the gold. What results is a layer of chloride compounds resting atop the layer of molten gold. Those impurities can then be skimmed off, leaving refined gold of 99.95% purity. Owing to its speed and ease, the Miller method is used to make the refined gold that we use in jewelry crafting.

The other method, the Wohlwill process, results in gold that is 99.99% pure. However, the Wohlwill process is more complex and has some other disadvantages, which we’ll get to in a moment. The Wohlwill processes uses electrolysis to refine the gold. A casting of impure gold is put into a solution of hydrochloric acid and gold chloride. An electric current is passed through the solution. The impure gold casting acts as an anode, which dissolves into the electrified solution. Through this process, the impurities do one of two things: they pass into the solution also, or they settle to the bottom of the tank as an insoluble slime. In the meantime, the gold, due to the electric field, moves to a negative cathode, where it once again is restored to a highly purified metallic state. As you can see, the Wohlwill process is very complex. It also has the added disadvantage of requiring technicians to carefully monitor and adjust the process. Also, because gold is required to utilize this process, it requires the refiner to keep a significant stock of pure gold on hand. Maintaining a stock of gold is an expensive undertaking. Gold refined by this process isn’t what is used to make jewelry alloys. This Wohlwill-refined gold is used in other (mostly industrial and technological) applications as well as to create fine gold bullion bars and coins. 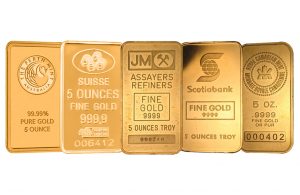 These two methods both result in pure gold, as close to 100% as we can get. This is what we refer to as 24 karat gold. As far as metal goes, 24 karat gold is pretty soft, generally making it unsuitable for jewelry. Although there are some cultural uses of 24 karat gold jewelry, the vast majority of gold jewelry is made using 14 karat or 18 karat. Some jewelry can be found made in 10 karat gold, which is the minimum karatage allowed to be considered gold in the United States. Although technically and legally called gold, 10 karat is not the most popular jewelry choice in the US. Fourteen and 18 karat gold is the standard in American jewelry. To get these alloys, the solid gold is mixed with other metals, producing different color variations and altering characteristics like the strength, hardness, and durability. But, I’m such a jewelry and science nerd that we will save that discussion for another day.